June 7, 2014, Eve of the Feast of Pentecost: The Descent of the Holy Spirit on the Church 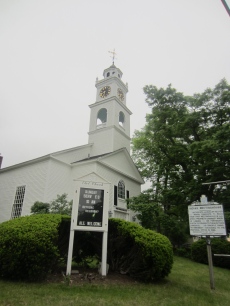 A few weeks ago, I had the good fortune of visiting the site of John Eliot’s first and oldest mission to the native Massachusett/Algonquian people of eastern New England: the first Meetinghouse of the Praying Indians of Natick, MA. Across the street from the meetinghouse, in a tiny, but lovely little brick structure lives the Bacon Free Library, and inside the library is a precious relic from New England’s religious heritage: a second edition original of John Eliot’s Bible translation into the language of the native people of Massachusetts! It sounds a bit odd from what we know of the subsequent history and relationship between the English Puritans (along with later settlers) and the Native Americans that there was a translation made of the whole Bible into a language only spoken by a relatively small section of humanity. When I spoke to the President of the Natick Historical Society, that is what she marveled at the most: Where did Eliot get such advanced ideas of toleration and outreach to such a disadvantaged and foreign people? The miracle of Pentecost is a direct answer to this most profound question: END_OF_DOCUMENT_TOKEN_TO_BE_REPLACED